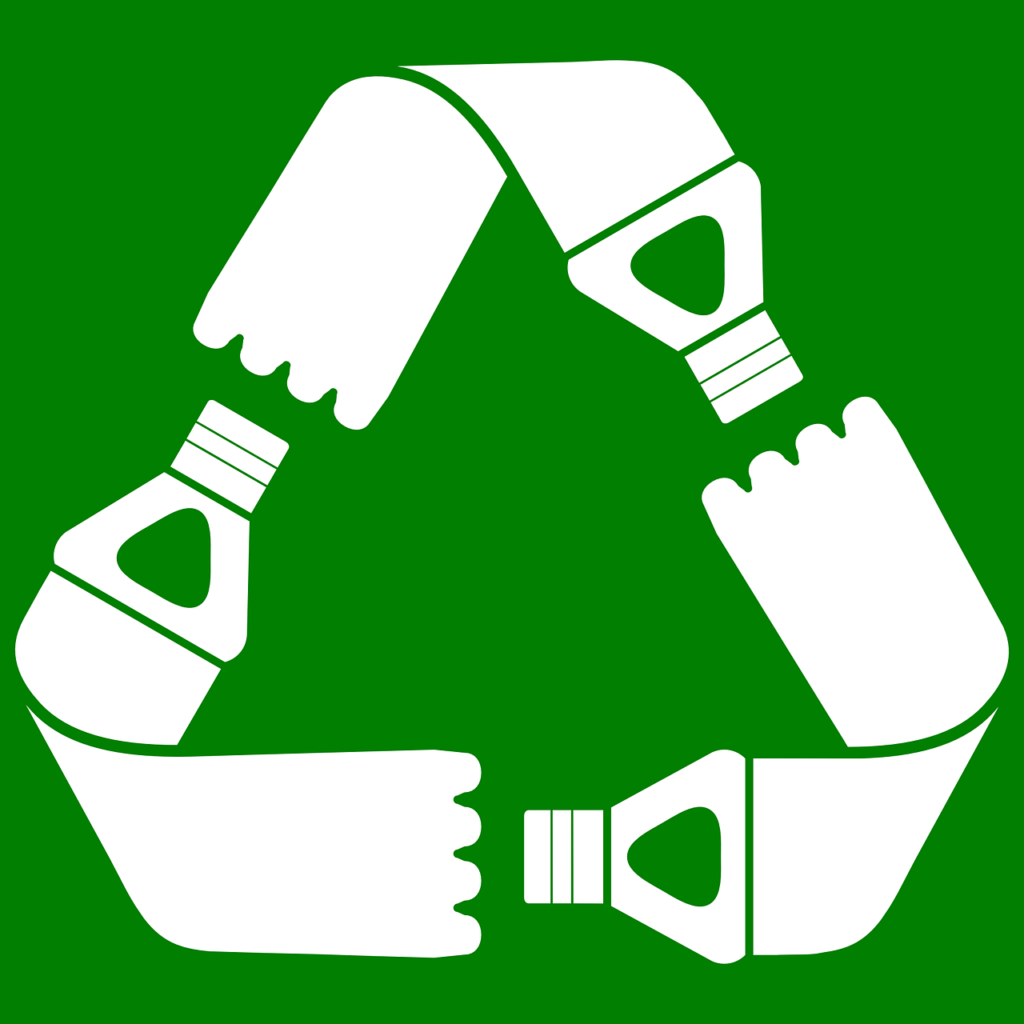 In recent years we have seen a growth in zero waste, more conscious living and a general move towards sustainability and reduction in unnecessary packaging. With this, there has been an awakening to the harmful effects that plastic has on the environment and to humans. Whilst many people are swapping their plastic food and drink containers for glass ones, there is much debate as to which material is actually better for the planet.  I’m going to take you through the production, recyclability, and decomposition of each material so that you can decide for yourselves which material you prefer to use, if any at all!

Glass has been around far longer than plastic:  glass is thought to have been invented around 3500 BCE whereas plastic was only invented in the 1900s! Despite this, plastic has made a colossal impact on our lives and environment, and overtaken glass in the amount produced. Although nowadays a lot of people are starting to ditch their plastic and replace it with glass alternatives, there are drawbacks to glass too. 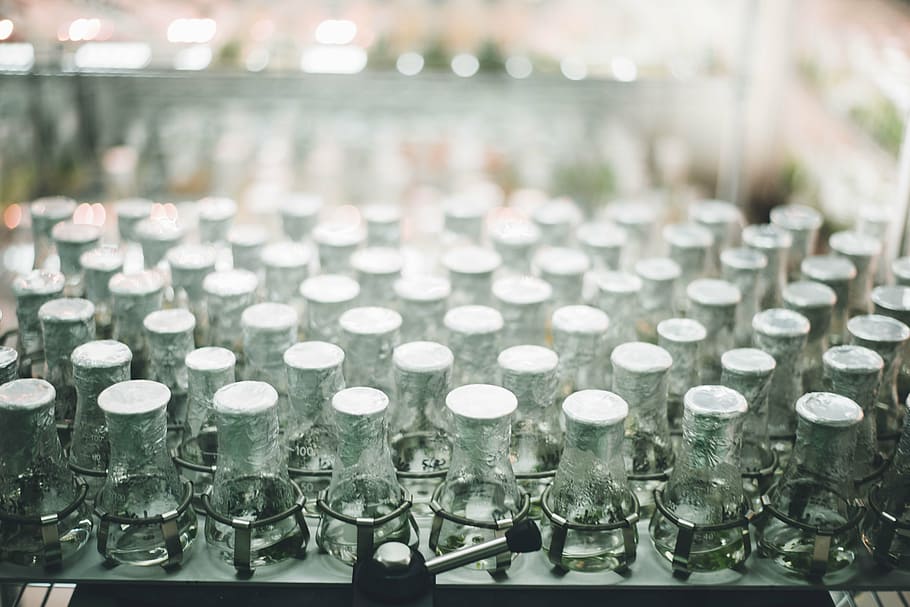 Making glass requires sand. Not just any sand though, only a specific type of sand can be used. Currently, we are using sand (50 billion tons a year) to make glass at a faster rate than the earth can replenish it. In fact, sand is used more in production than oil is. Sand is harvested from riverbeds and seabeds, disrupting the ecosystems from which they are taken from. This can lead to increased risk of flooding and erosion in those areas.

Overall, the entire glass-making process uses up a lot of raw materials, time, energy and resources. The estimated carbon footprint of one 500ml glass bottle is equal to 503g of carbon dioxide. It creates even more emissions from transportation, as well as the fossil fuels that are burned in order to heat up the furnaces that the sand is melted in. 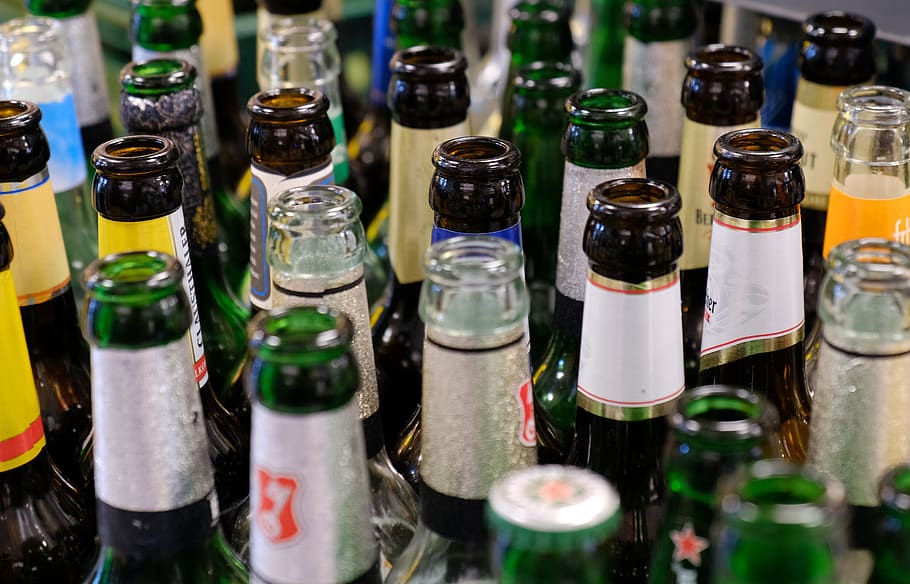 Luckily, despite the large carbon footprint that glass production creates, the material sort of makes up for it by being endlessly recyclable. Glass does not degrade or loose its purity when it is recycled. Unlike plastic, which can only be recycled maximum of two times before it is downcycled. This sounds like a huge pro when comparing plastic and glass.

However, in the UK only 50% of glass is recycled. Where does the other 50% go? Well, glass is often crushed and used as cheap landfill cover, and a lot of consumers put non-recyclables in recycling bins (known as ‘wish-cycling’) which contaminates the entire bin, preventing contents from being recycled. Window glass and Pyrex glass are manufactured to withstand high temperatures, which means that they also cannot be recycled with normal glass.

Another issue with recycling glass is that the process of making glass out of old glass (cullets) is very similar to producing glass from sand. Coloured glass can only be melted and recycled with similar colours, which means that sometimes sorting the glass out can be quite labour-intensive. The good news is that if glass manufacturing facilities used 50% of recycled glass content to make new glass, there would be a 10% decrease in Global Warming Potential (GWP). This would remove 2.2 million metric tonnes of CO2 from the environment (the equivalent of nearly 400,000 cars every year). 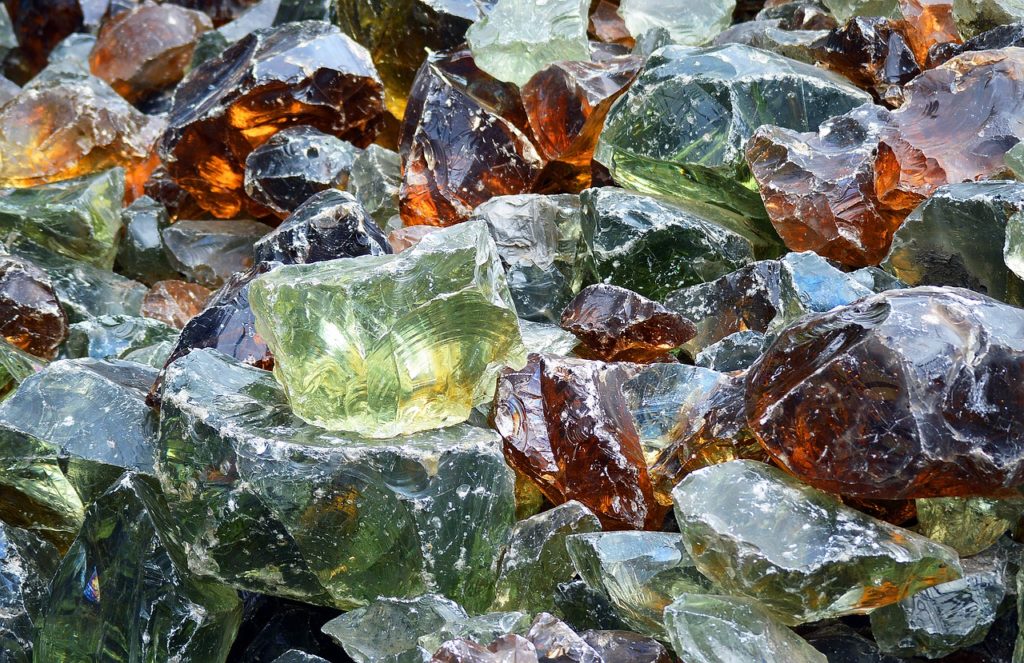 Glass takes about one million years to decompose in the environment and takes even longer to decompose if it ends up in landfill.

However, when glass breaks down, it remains safe and stable and does not release any harmful chemicals into the environment. Hurray! This is much better, as you will soon find out, than the decomposition of plastics…

Plastic has been the wonder-material for decades now. It has been used for pretty much every aspect of life: clothing, packaging, eating and drinking, sports, household items, the list really is endless. But, as with all new-found materials, we didn’t realise the impacts that it has on not only the environment but also ourselves, until too late. As I’m sure you’re aware by now, single-use plastics are the bane of all evil, however, what you might not know is that they aren’t the only plastics that are bad for the planet. 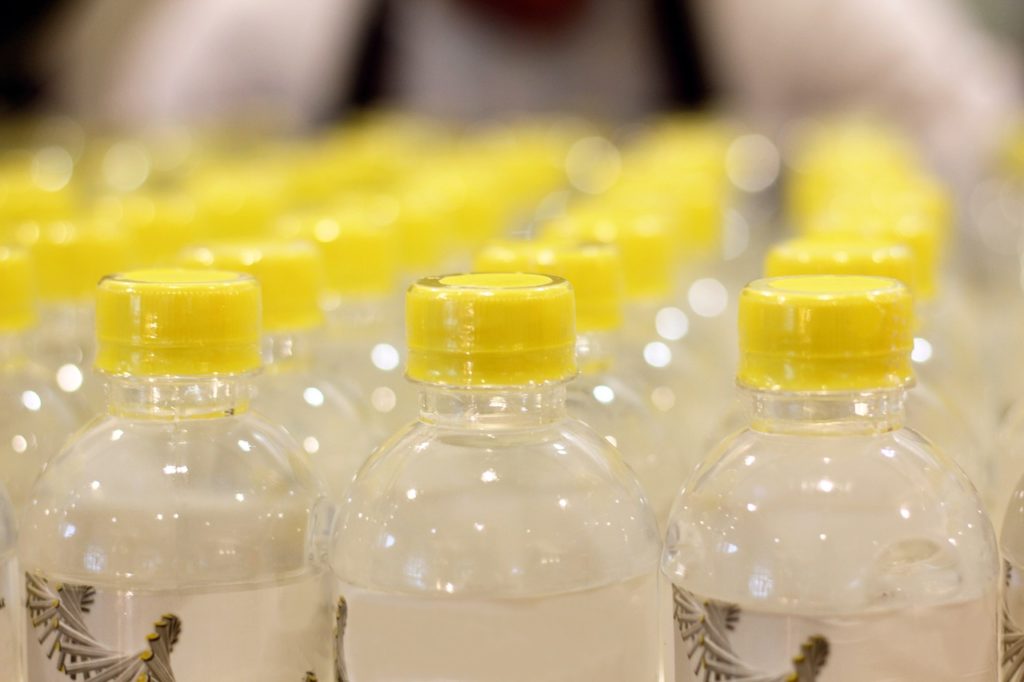 To produce plastic, you need oil and natural gas as raw materials. Plastics are processed from crude oil or in a cracking process into hydrocarbon monomers. These are then processed into other monomers and then chemically bonded to make polymers.

The oil that is used for this process is a non-renewable and unsustainable source. In order to retrieve the oil, we have to drill deep down into the earth. Drilling for oil has caused countless environmental problems including disturbing land and marine ecosystems and oil spills (which are detrimental to many animals and plants living in the surrounding habitat).

Estimates show that one 500ml plastic bottle of water has a total carbon footprint equal to 633 grams of carbon dioxide. Producing plastic bottles each year releases more greenhouse gas emissions than over a million cars on the road. In 2018, the CO2 emissions from the manufacture of plastic products was over 2.7 million metric tons. So, to say that plastic has a large carbon footprint is a bit of an understatement.

On our current plastic-producing course, emissions from plastics will reach 17% of the global carbon budget by 2050. This budget estimates the maximum amount of greenhouse gases that we can safely emit without making global temperatures rise above 1.5°C. This sounds okay, but in reality, what it means is that there is simply no space for increased production of plastic (scary, considering we live in a growth economy!).

The other 9% of plastic that does get recycled, can only be recycled two times before it must be downcycled. This means that the quality of the recycled plastic produced only gets worse. If the plastic doesn’t get recycled it may be incinerated or will go to landfill. Incineration isn’t a favourable method of disposal as it releases a lot of greenhouse gases. But only 12% of plastic has been incinerated (although that’s more than the amount that has been recycled!).

No matter the method of plastic disposal, they all release carbon dioxide. Eventually, all recycled plastic becomes a waste item that can no longer be recycled and therefore must go to landfill or end up in the environment. In fact, half of all plastic becomes rubbish in less than a year. Plastic takes 1000 years to decompose in landfill, but even then, it does not biodegrade… 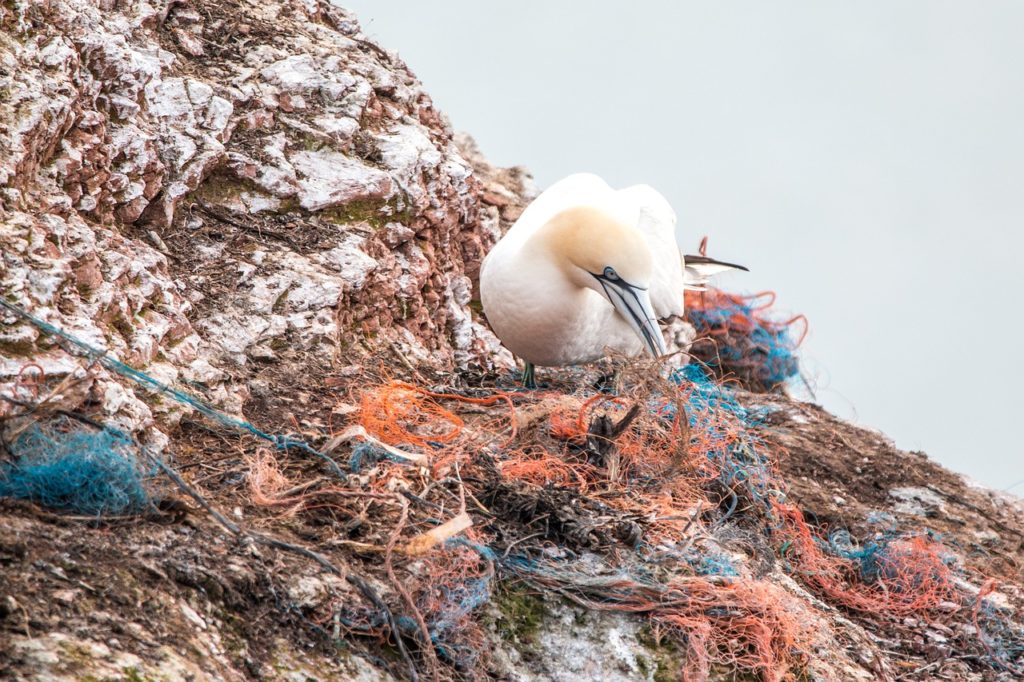 If left to decompose in the environment, plastic takes around 450 years to decompose. However, when plastic breaks down, it does not biodegrade. Instead, it breaks down into smaller pieces, called microplastics. These microplastics pollute our waterways, soil, and air. Our oceans are estimated to have about 5.25 trillion macro and micro pieces of plastic in them, with 8 million pieces making their way into the ocean every day. In the UK, untreated water contains 4.9 microplastics per litre. Thankfully, by the time it has been treated and enters our homes through plumbing, only 0.00011 microplastics per litre are found in our water.

When plastic breaks down, it leaches chemicals into the environment in which they are left in. In fact, from the moment that raw materials are made into plastic, they start to emit CO2. Not only do they emit CO2, but many plastics also contain a chemical compound variant of bisphenol. The most well-known compound is bisphenol A, or more ‘affectionately’ referred to as BPA. This plastic additive, along with other bisphenol compounds, leach into our food and drink that is contained within the plastic packaging. These chemicals act as endocrine disruptors, which are linked to breast and prostate cancers, infertility, and metabolic disorders, along with more side effects. 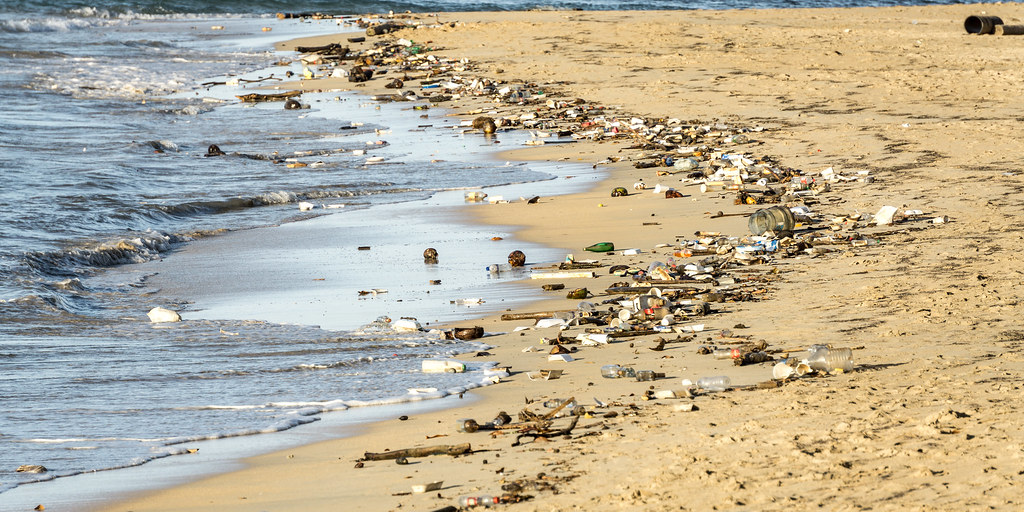 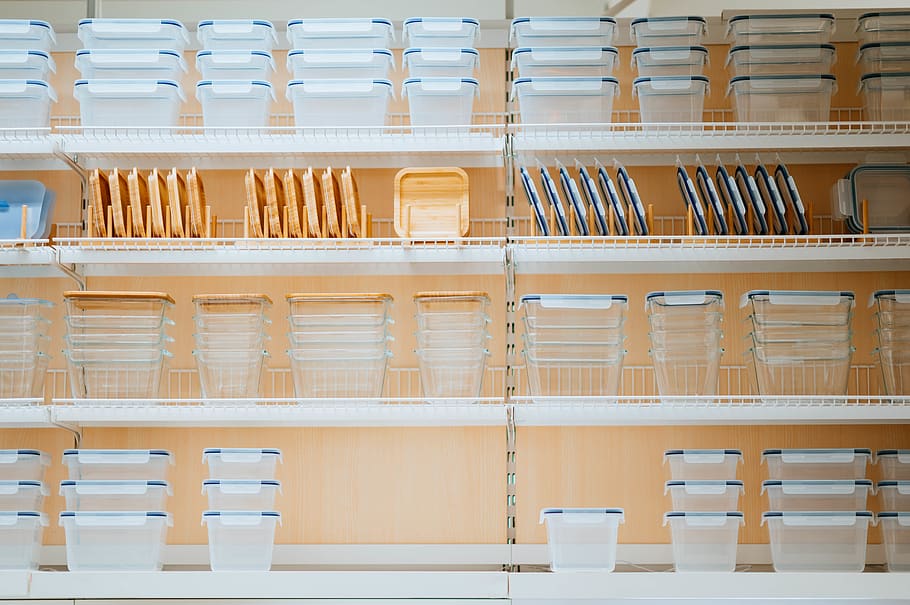 Overall, both materials are unsustainable to produce and from their production-to-use glass results in more greenhouse gas emissions being made than plastic. However, glass is infinitely recyclable whereas plastic is not, and glass does not release any harmful chemicals. Plastic on the other hand releases multiple harmful chemicals, and from the moment it is created it emits carbon dioxide. Finally, glass decomposes without causing any harm. Plastic only breaks down into microplastics, which pollute our air, water and soil.

I don’t know about you, but I think glass is a winner out of the two! Even though its production is very carbon-intensive, it can be made out of recycled glass, which reduces its carbon footprint; it can be re-used and recycled an infinite amount of times; and it is safer for us to put our food and drink in.

I think that it is important to mention that every little helps, and if every person committed to just using one less piece of plastic, or cutting out single-use plastics, it would dramatically change the landscape of plastic production! Also, if you already have plastic bottles and containers, don’t just throw them away! Continue to use them (maybe use them for non-ingestible items, just to be on the safe side) until they are well and truly done in. Then you can replace them with a better alternative. Plastic existing isn’t necessarily a bad thing, but the way we produce, use and dispose of it is.

There are also instances where glass cannot be used in place of plastic, and vice versa. There are plenty more alternatives to both these materials, though – watch this space for more packaging alternatives!

P.S. If you are unsure of what you can recycle and where, just have a look at your local council website, or give them a call or a visit (remember to wear a mask!).

Getting a good amount of sleep is vital for productivity and leads to a happier you! Unfortunately, if you suffer from hay fever and have symptoms such as itchy eyes and a runny nose,

In recent years we have seen a growth in zero waste, more conscious living and a general move towards sustainability and reduction in unnecessary packaging. With this,